Whether you’re new to surfing or just wondering why you’re getting angry looks in the water, this guide is for you. It’s our guide on surf etiquette. You know, the ‘rules’ of the water. The unwritten code (which is actually written?!). The laws of the surf. Or, How to Not Be A Dickhead, as we fondly call it. It’s basically things that are there to keep yourself and others safe, and having fun in the water, free from collisions and fights with disgruntled locals. So here you go, we present to you How to Not Be A Dickhead in The Water… 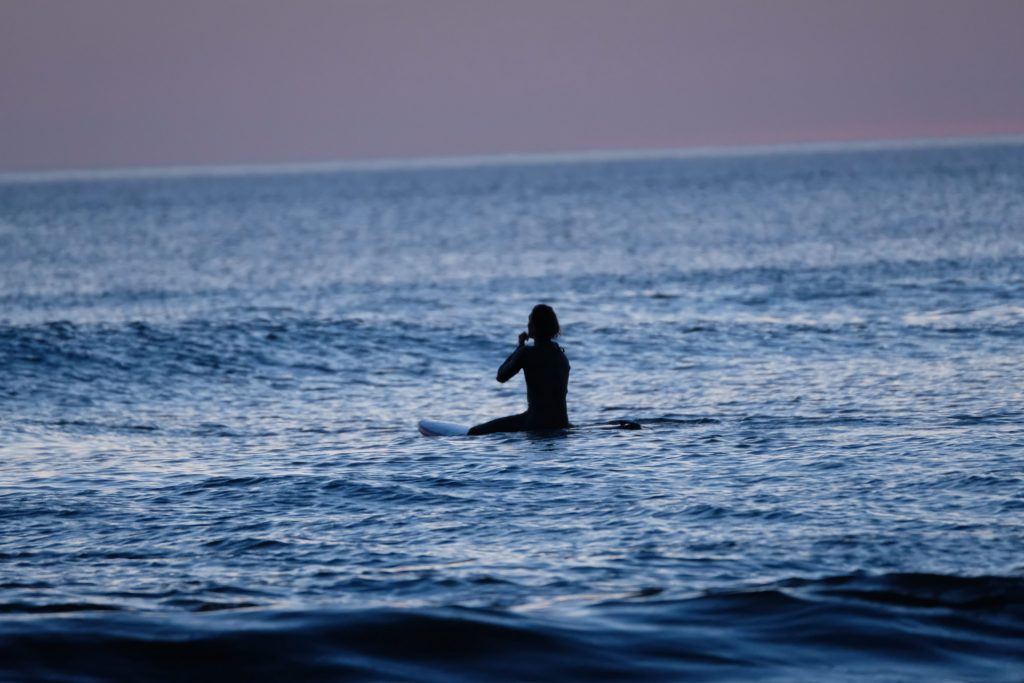 First things first. If you’ve never surfed before, book yourself some lessons! Get yourself to a professional surf school, with fully licenced instructors. You’ll be safer, you’ll be happier, and you’ll know which way round the wetsuit goes (back-zip at the back, you can thank us later). Trust us, however uncool you look in a brightly coloured rash vest, you’ll look even stupider if you don’t know which end’s the front of the surfboard. Yep, seriously, we’ve seen people trying to surf fins forward…and not in a cool, I can longboard, sort of way.

Furthermore, if you’re taking lessons, then make the most of them! Sure, you’ve watched Bethany Hamilton lose her arm in Soul Surfer but that doesn’t make you a pro. Listen to your instructor. They know what they’re talking about. If you completely ignore them and paddle a mile out to sea, then no, they’re not going to be able to give you much individual advice (apart from paddle the fuck back).

Similarly, if after your lesson you’ve caught the surfing bug and are keen to go surfing on your own, keep in mind the advice of more experienced surfers. If your instructor has advised you it’s super big and they’re not even going to get in the water, consider there’s most likely a good reason why. Probably best not to try and get barrelled on a foamie in triple-overhead surf when you’ve not yet left the white-water.

Although that sometimes it’s frustrating for more experienced surfers when the line-up is packed with surf schools, it’s even more annoying when it’s packed with absolute beginners who haven’t taken any tuition and are a danger to everyone else!

Don’t be a dick. Get some lessons. 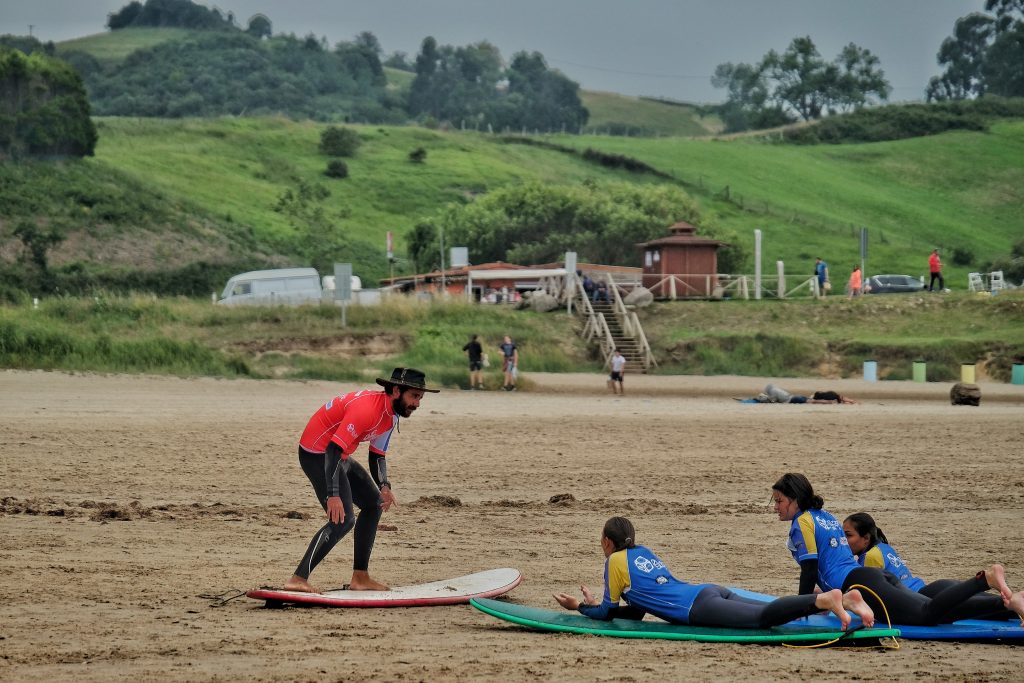 Now, let’s get onto the real stuff. Surfing priority. If it’s your priority on the wave you can surf it, if it isn’t, don’t. Simple, right? Priority works like this, the surfer with the priority is the one closest to the peak of the wave (where the wave is breaking). Everyone can paddle for the wave but must check before taking off that no one with higher priority is going to surf the wave. That means that if you’re surfing a left, check over your right shoulder. If you’re surfing a right, check over your left. If someone is already surfing the wave, don’t try and surf it too.

Furthermore, don’t snake the line-up. By snaking we mean paddling around the surfer who has priority for the next wave in order to gain priority yourself. It’s a dick move. Don’t do it. Wait your turn. In an ideal world, the line-up should work a little like a conveyer belt, with the person who’s been waiting the longest being closest to the peak, thus having the priority and taking the wave. For the next wave, the person who’s been waiting second longest takes the wave, and so on and so on.

Don’t be a dick. Respect the priority. 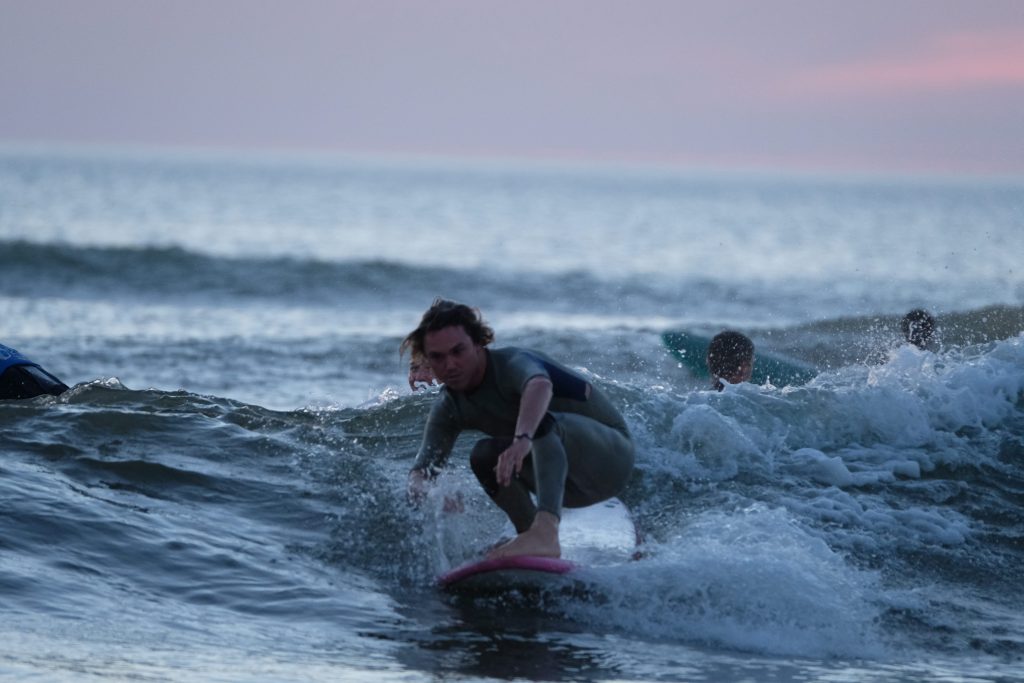 To drop in on someone is probably the definition of being a dickhead. It’s like giving a patiently waiting child an ice cream, watching their face light up as the sugar rush begins, and then taking the ice cream and eating it in front of them. Yeah, sure, the ice cream tastes good, but the associated guilt tarnishes the experience a bit, and you can’t enjoy it fully over the kid’s hysterical crying.

In non-ice-creamy terms, dropping in is when you paddle into and surf a wave which someone with higher priority is already surfing. It ruins the wave for both of you and is potentially very dangerous. 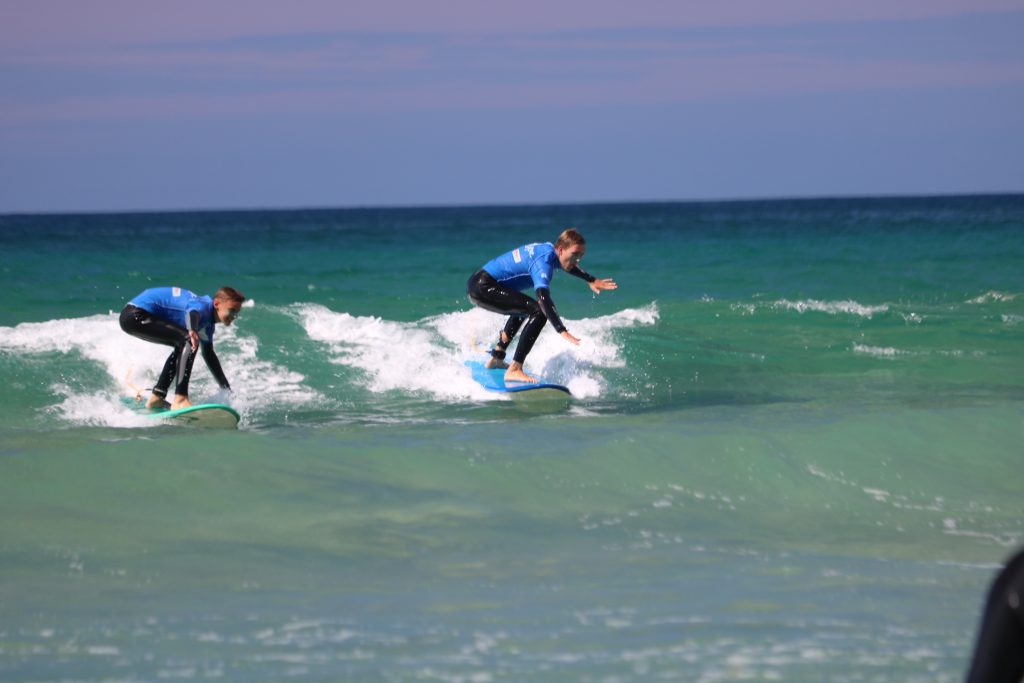 One Wave, One Surfer

Quite simply, each wave should be surfed by only one surfer. This, again, is for both reasons of safety and enjoyment.

There are two exceptions to the one wave, one surfer rule. The first is if it’s an A frame, and thus the wave breaks with both a left and a right. Here there are two faces to surf, one surfer can surf the left and another the right, splitting the wave. The second exception is when surfing with friends, on shout of, ‘’PARTY WAVE!’’, you all take the wave, and thus chaos ensues.

Don’t be a dick. One wave, one surfer.

When you’re going to check the spot, take into consideration how crowded the spot is, as well as what the surf conditions are like. Realistically assess what the chances are of scoring waves. Are there plenty of waves to go around? Or are you just going to sit in the water for hours, frustrated, watching the same group of shortboarders, who appear to have been surfing since the womb, catch everything. Yep, you can sit there, occasionally getting in the way, and hope everyone miraculously and simultaneously decides to get out, but you might have more fun going elsewhere, if that’s an option. If the spot’s super crowded already, and you rock up in a group of four or five, are you going to be catching waves or just making the line-up even more oversaturated?

Don’t be a dick. Check the crowd. 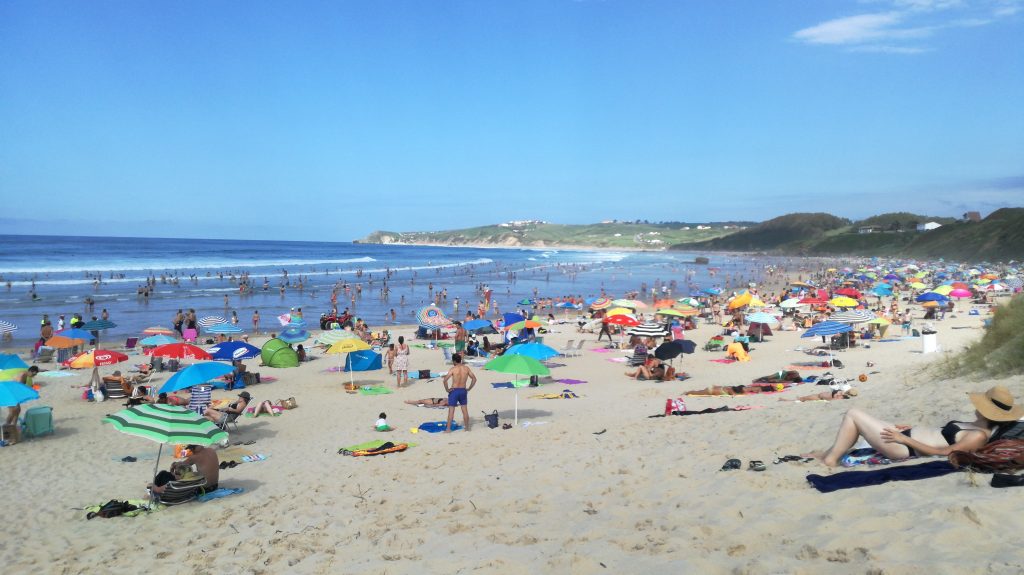 When paddling out, don’t paddle straight through the line-up. Instead, paddle around it, using the channel. This will both make your paddle-out easier and decrease the chances of you getting in the way of other surfers. If, when paddling out, there is someone surfing a wave in your direction, make it clear which way you intend to go. Generally, paddle towards the white-water, not the face of the wave.

Moreover, when you get to the line-up, paddle into a space. Don’t sit on your board, directly in front of a surfer who’s sitting further out. Where are they going to surf? Similarly, don’t sit so close to another surfer that you float into their board whilst you’re waiting. It’s not a cute way to meet a lover, it makes you Kooky McKookface.

Don’t be a dick. Paddle around the line-up and into a space. 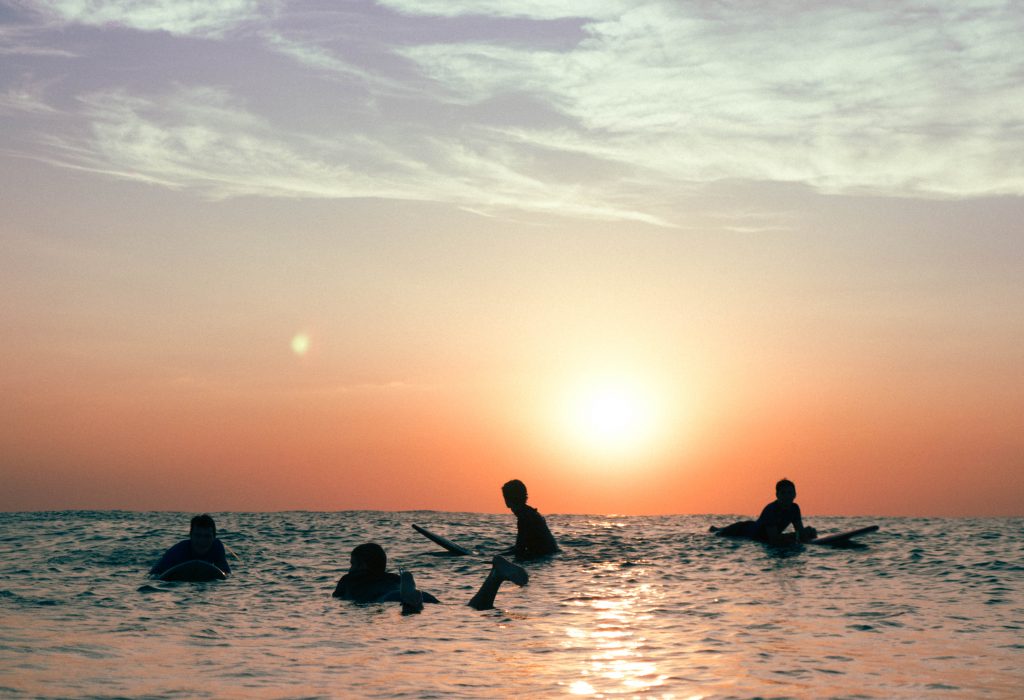 If the waves about to break on you, or you’ve got a tonne of white-water rushing towards you, don’t ditch your board. There are several things you can do, depending on the situation. Firstly, you can paddle further out, or away from where the wave is breaking, to go over the non-broken wave and avoid getting smashed. Alternatively, there is the option of turning to face the beach, paddling in front of where the wave is going to break, and catching the white-wash in the direction of the shore. Another option is turtle-rolling or duck-diving under the breaking wave. You can also paddle hard towards the oncoming whitewash (if it isn’t massive), push up on the board with straight arms, and let the water run in-between you and the board. The final, and probably less advisable option, is to panic excessively, do nothing, hold your board tight and take the beating that will ensue. Whichever tactic you choose, try your hardest to hold on to the massive fucking weapon that’s attached to your ankle by a rope.

Don’t be a dick. Don’t ditch your board. 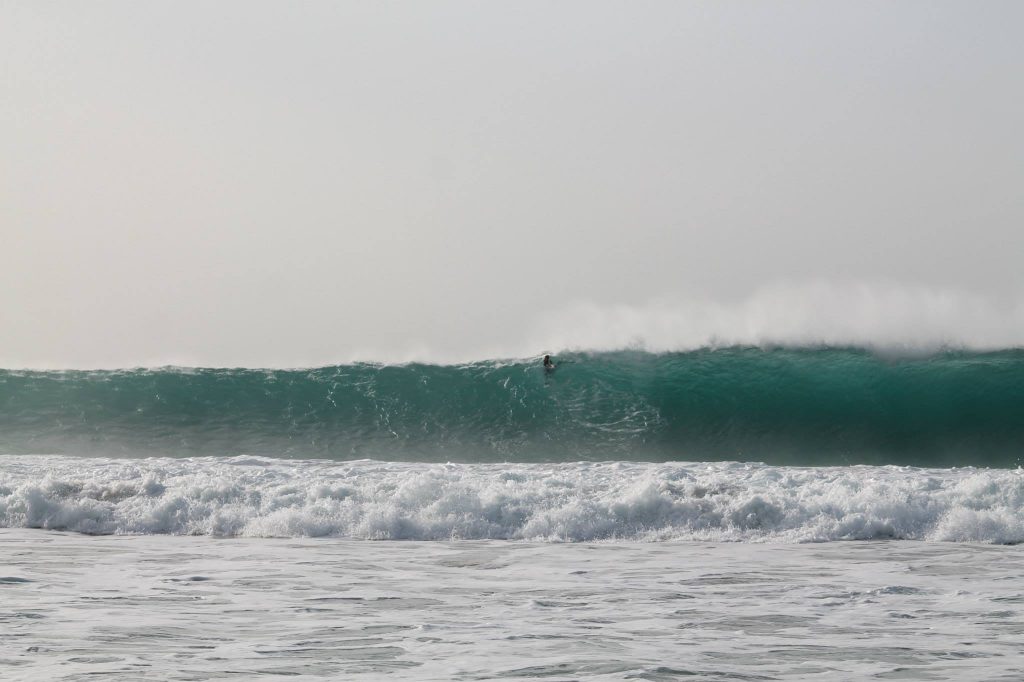 Just like Aretha Franklin sung, have a little respect. (Well, actually it’s better if you have quite a lot of respect, but that’s not what she sung, ya know). Respect yourself. Respect other surfers. Respect the locals. Respect the beach. Respect the ocean.

Respect that everyone is in the water because they want to have a good time surfing. Just because you can catch every single wave, it doesn’t mean you should. Share the waves around, don’t be greedy.

Respect the ocean. The ocean will win. It’s powerful and unpredictable. Be a little conservative. Leave yourself enough energy to paddle back to shore. Don’t surf at a break where the conditions are way over your current ability level. There’s a difference between challenging yourself and putting yourself in excessive danger.

Respect the beach. You’ve seen the ‘Take only memories, leave only footprints’ wankyness in the calligraphic font on your wanderlusting friend’s Instagram. Yeah. As corny as it may be, it’s true. Actually, even better if you take any rubbish you find on the beach with you. Yes, bananas are natural, but no, they don’t degrade quickly in the ocean, and don’t even get us started on cigarette butts.

Don’t be a dick. Have some respect. 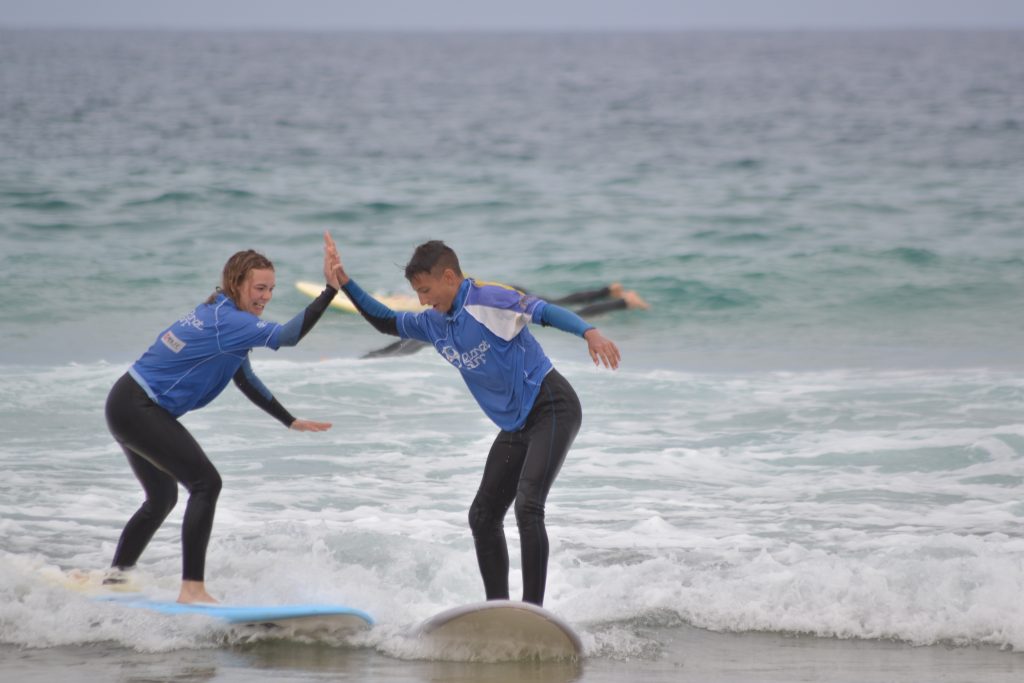 Everyone Fucks Up Sometimes

No one’s perfect. Everyone fucks up sometimes. If you drop in on someone, get in the way, or accidentally punch an endangered sea creature, apologise. Forget your pride. If you crash with someone and your leashes get tangled, apologise. As much as this may appear at first sight an excellent pick up line, it’s super dangerous. (Oh, how did you meet? Ah, when I crashed into them, gave them concussion, our leashes got tangled and we both nearly drowned. Our first date was in the hospital). Yeah, better not. Apologise, untangle yourself, and paddle off].

The same goes the other way around, if someone fucks up, and drops in on you by mistake but then apologises, let it go.

Don’t be a dick. Shit happens. 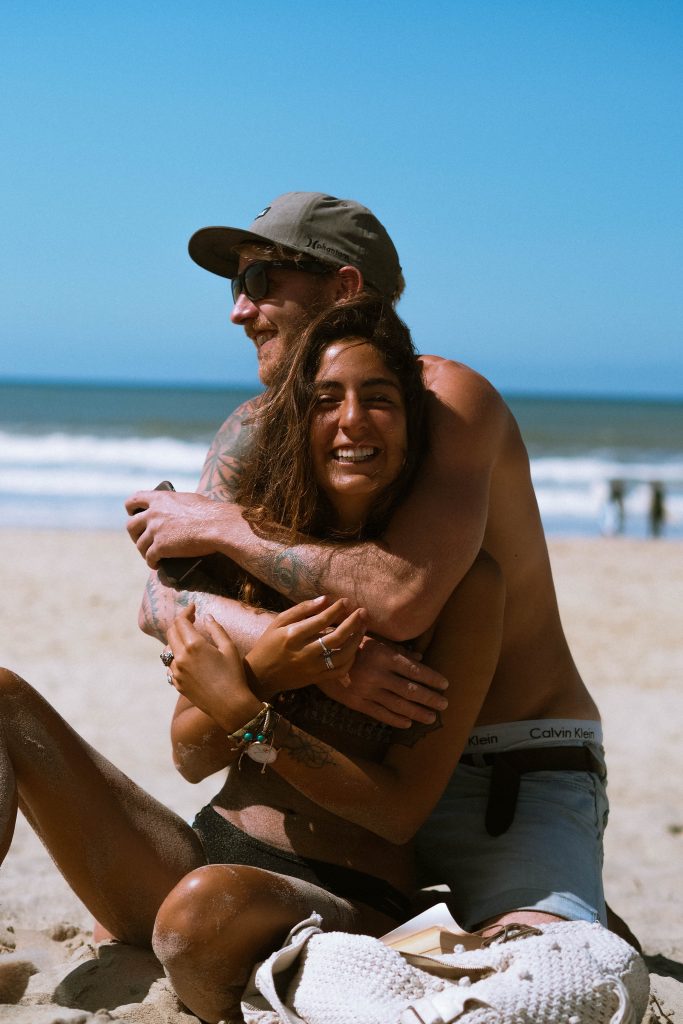 You can remember all this list, using the first letter of each rule, with the help of the catchy acronym Thank Poseidon Dat Oceans Create Potentially Dangerous Riding Experiences. Yeah. Doesn’t help at all. We know. Don’t worry though, most of this is common sense!

Happy Not Being A Dickhead!

P.S. If you were here to check out if the guy who’s always dropping in on you is in fact in the wrong, then feel free to print this guide, get it laminated and hand it out in the line-up. It’s a bit lengthy, we know, so you should get a few good waves whilst they're reading it.